Remote Control: 6 Inspiring Stories of Broadcast Innovation in the Age of COVID-19

It takes resiliency and out of the box thinking for broadcasters to succeed at the best of times, and in 2020, when the going has been tougher than anyone could have predicted, Haivision customers have become more innovative than ever before.

From adhering to strict COVID-19 regulations to ensure the health and safety of employees to enabling remote collaboration among distributed workforces, here’s a round-up of some of the most our most inspiring customer stories in the face of some pretty major obstacles.

1. The NFL: A Virtual Draft

This year’s NFL draft switched from the originally planned live event in Las Vegas to a completely remote, at-home, socially distant broadcast because of the coronavirus. With less than three weeks to spare, Haivision technology along with the SRT protocol played an integral role in helping the NFL to pull off one of its most ambitious projects yet: delivering the first-ever virtual NFL Draft.

Haivision solutions, Makito decoders and SRT Gateways, together with the SRT protocol helped bring together camera feeds in the homes of everyone from the NFL Commissioner and 58 draft prospects to 32 NFL teams, including their head coaches and general managers, as well as analysts. Hailed as a massive success, the virtual draft drew record viewing figures with 55 million fans tuning in to watch during the three-day event – an increase of viewership of 35% over 2019. What’s more, the event gave viewers a rare glimpse into the home lives of all concerned. From the commissioner in his basement to the General Managers, head coaches, and prospects, the virtual draft captured many unique and intimate moments. READ MORE 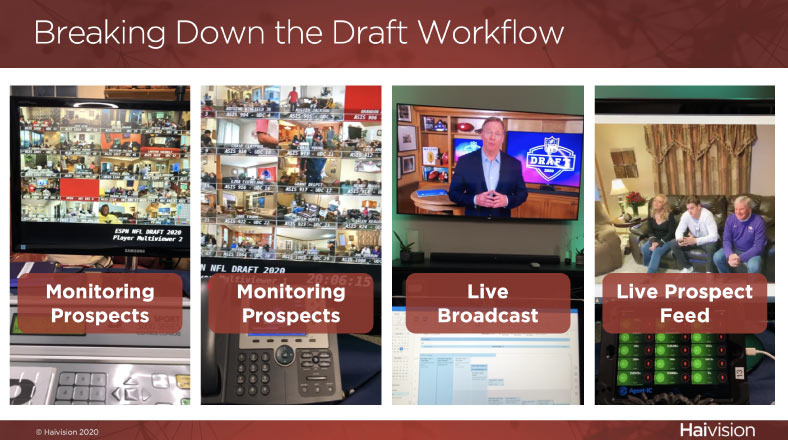 Throughout the eighth season of China’s most popular talent show, Singer 2020, Hunan TV, one of China’s biggest broadcasters, was forced to rethink the entire production of the show because of the restrictions brought about by the coronavirus pandemic. Up against tight deadlines, limited resources, and logistical constraints, Hunan TV landed on an ambitious plan to ensure the success of the live grand finale.

By leveraging the combination of innovative Haivision Makito X video encoders and decoders, SRT Gateways, and the SRT protocol, Hunan TV was able to deliver its first-ever live remote production of a TV show in China across three locations: Changsha, Taipei, and Tokyo to a record-breaking audience. READ MORE

Fox Sports was one of the first North American broadcasters to bring live sports back to air, starting with the return of NASCAR in May, and then expanding their coverage as other major leagues, like the MLB returned to play. The workflows used by Fox Sports to bring sports back to television have been a progression, starting with the Production Anywhere model used for NASCAR, and progressing with the addition of remote commentary for the MLB coverage.

This innovative approach, made possible with Haivision’s high-quality, low latency video streaming technology, continues with their NFL broadcasts, with statisticians and analysts working from home and contributing in real-time.

Fox Sports’ Production Anywhere model is the next level of remote production as it enables distributed teams to collaborate effectively in real-time on live sports broadcasts. This means that even with safety guidelines and travel restrictions, Fox Sports is able to leverage the very best talent, at all times. As a result, they are able to continue to generate high-quality content for their viewers while ensuring the safety of their staff. READ MORE 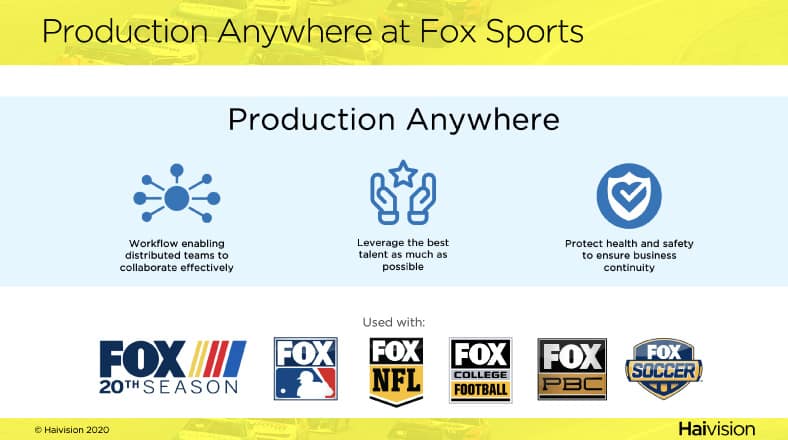 Keep up with the latest Haivision news!

AUDIO2 provides an audio description and subtitling service which makes content more accessible for those with visual or audio impairments. Today, it works with broadcasters across Germany, Austria, and Switzerland including ZDF, ORF, SWR, SRF info, among others. Using a combination of Haivision Makito X video encoders and decoders and an SRT Gateway, AUDIO2 sends video streams with the open source SRT video streaming protocol from broadcast studios to AUDIO2’s office, where its team usually works to transcribe subtitles.

During the pandemic, the company needed to ensure that its audience would be able to get their news in a timely fashion. The fact that AUDIO2 could already subtitle remotely, from their offices, already helped to protect their staff, minimizing travel and the company has further extended its services by employing flexible at-home workflows. By using the Haivision Play app, AUDIO2’s staff can receive live video feeds at home on a tablet. And using these live feeds, they can then send live audio description back to the studio to the mixing console. READ MORE

Live video production and delivery experts, The Switch, has been connecting viewers around the world to live events for almost three decades, bringing them the content they want across linear TV, on-demand, and streaming platforms – on multiple screens and devices. With a significant uptick in demand for its live content services to plug the gap created by travel restrictions, the Switch’s enterprise and broadcast customers are far more willing to experiment with remote IP-based workflows.

Currently using Haivision Makito X video encoders and decoders for several ongoing customer projects for live sports viewing and betting as well as for esports, the Switch chose Haivision solutions for their low latency, high quality, and reliability, as in some cases, systems are running 24/7. The Makito X platform was also selected because of its native support for the Secure Reliable Transport (SRT) protocol which provides both excellent packet loss recovery and the security that Switch’s clients demand to protect their valuable content. The lightweight compact form factor is also a plus factor as Makitos are used in its flypacks in the field. READ MORE

The Switch control room during COVID-19

UK-based outside broadcast specialist, Cloudbass, is a leader in coverage of live sporting, political, and broadcast events with high profile clients such as Sky and the BBC. To enable new and flexible ways of working to comply with social distancing regulations and limit the number of crew on site, Cloudbass made the switch to remote workflows remote monitoring, vision, and video mixing as well as remote operation of replay systems and graphics.

Using a combination of Makito X4 video encoders, an SRT Gateway, and SRT, the Cloudbass has created a solution that delivers less than 500ms of latency, enabling the team to collaborate seamlessly no matter where its members are located, to give viewers a rich and engaging experience. READ MORE

These customer stories perfectly illustrate what innovation and resiliency look like when adapting to the unpredictability of 2020 and serve as a model of inspiration. We’re proud to play a supporting role with technology that powers remote broadcast workflows.

Read our complete resource covering everything you need to know about remote production.