Next Generation ISR: Haivision and Klas at the Edge

Haivision recently joined forces with defense partner, Klas Telecom Government, in a webinar to take a deep dive into how our two organizations have been working closely together to solve some of the biggest challenges for video processing at the edge of the network for ISR applications.

Focused on situational awareness, which allows multiple organizations converging on the same incident to have a common operational picture and allows effective collaboration, ISR relies heavily on data collection and some of the most valuable data is “eyes on the ground” or video. Klas Telecom Government’s Voyager platform allows data collection from a variety of different sources with the ability to process and make sense of the data locally and distribute actionable information to the right people, quickly enabling timely decision-making.

Klas Telecom Government has partnered with Haivision to seamlessly integrate the Makito X video encoder and Kraken transcoder into Voyager’s modular, scalable form factor making it easier than ever to quickly send video from the ground to command centers for enhanced decision making and situational awareness. As VP of Engineering Klas Government Telecom, Herman Leybovich highlights, “Our partnership with Haivision goes farther than simply downloading software and ensuring it runs on our hardware. It involves a deep exchange of technical information and working together to identify and solve customer problems.” 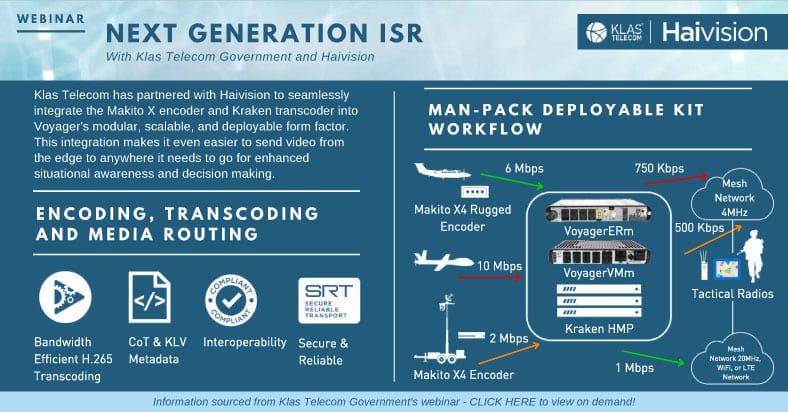 During the webinar, Haivision System Engineer and Product Manager for Kraken, John Lawrence, provides a high-level overview of what Haivision Kraken does and how it’s used before diving into a demo. Kraken is a highly versatile software solution for encoding, transcoding, and routing of live video with metadata. Kraken’s core competency is compressing and distributing high quality HD video with KLV metadata at low bitrates across constrained networks and is used by many DoD organizations to overcome bandwidth, network, or workflow constraints. John shares a demo of how Kraken running as a VM on Klas hardware can offload transcoding work to the GPU to gain high transcode capacity on a small form factor device.

Find out more about the Kraken video encoder and transcoder series for ISR communications.

Finally, Klas Telecom Government Senior Sales Engineer, Marty Distel, highlights why together, Haivision and Klas are the go-to solution for video transcoding, encoding and sharing video feeds on a congested network and outlines four critical factors to consider for next generation ISR. These include low SWaP (size, weight, and power), interoperability, ease of use, and the ability to be modular, interchangeable, and scalable. Watch the webinar to see a demo of video transcoding and backhaul from a deployed Voyager to Kraken and Haivision Media Platform hosted in Microsoft Azure.

Watch the webinar to learn about next generation ISR solutions from Klas and Haivision.