Unicast vs Multicast vs Broadcast: What’s the Difference?

By Mark Horchler All Updates

Today on the blog we’re tackling a question that we’re frequently asked when discussing live video streaming and distribution: what is meant by the terms unicast, multicast, and broadcast? This primer will give you a basic overview of the differences between the three most common ways to distribute live video.

One very simple way to remember the difference is one-to-one, one-to-many, and one-to-all. Read on for a more detailed explanation of each. 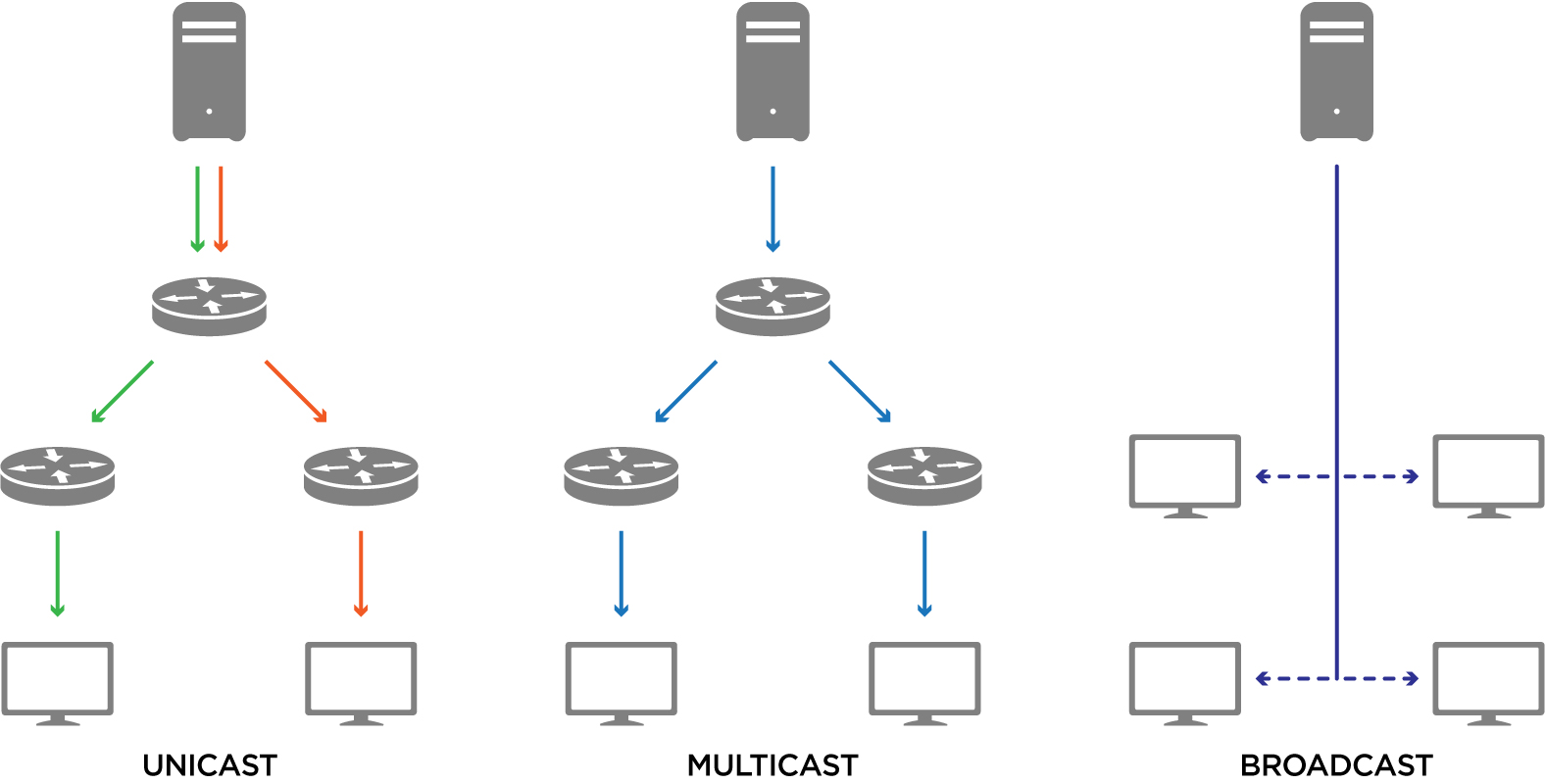 Unicast is a one-to-one connection that uses TCP (Transmission Control Protocol) for delivering streams over the internet. A user requests information from a server, website, or another user, and the other party sends it after establishing a unique connection. Unicast is great for on-demand, watch whatever, whenever you want content. OTT or Over the Top services rely on unicast for streaming live video to smartphones, tablets, SmartTVs, and other internet-connected devices.

When delivering a live sporting event via an OTT app, an origin server is used to live stream content to thousands of individual viewers around the world. Each person watching the live stream has a unique connection between their viewing device and the origin server in unicast mode. As unicast streaming takes place over the internet, network paths and bandwidth availability can vary greatly from stream to stream. As a single origin server may struggle when delivering thousands or even millions of unique unicast streams, Content Distribution Networks (CDN) are used to distribute the streams across the internet and share the load.

Multicast is a one-to-many streaming over IP method similar to traditional broadcast. Multicast uses UDP (User Datagram Protocol) for “broadcasting” a stream over a closed IP network such as a LAN (Local Area Network) or an IP Service provider’s own network. Multicast streaming of live TV is commonly referred to as IPTV, whereas OTT is unicast over the internet.

In a multicast IP network, the content sender only needs to deliver a single stream, and the nodes along the network will replicate that stream across the entire network, as in a relay race. Using multicast for distributing video to hundreds or thousands of users is the preferred video delivery option for companies and organizations as it avoids flooding the network with duplicate streams. Multicast is also used for transporting SMPTE ST 2110 video, audio, and metadata streams within a broadcast facility or OB production network.

Finally, the most well-known and traditional method of video distribution, broadcast. Broadcasting sends out a signal to everyone all at once from a single source, and whoever has a receiver within range on a network can view the content. Predominantly used by television stations and cable tv channels for live content distribution, the biggest advantage of the broadcast approach is that it can reach audiences on a massive scale. Think one-to-all.

Which One is Right for my Video Stream?

Whereas the broadcast one-to-all approach is still widely used for delivering live content over traditional linear TV services, broadcasters are also increasingly adding unicast OTT services. Although enterprise customers will want to share live content such as all-hands meetings or IPTV channels via multicast across their internal network, they may also want to include unicast streaming for sharing video with mobile workers. Each of these approaches has its uses, and no matter the content or organization, there is increasingly a need for a mix of one-to-one and one-to-many streaming depending on the application, network, and audience.