How the U.S. Department of Veterans Affairs Uses Digital Signage to Inform Patients and Employees

In any large organization, the process of communicating with employees can often be a daunting task. Add to that the need for customer/client satisfaction, and you’ve got a lot of communications that can only be described as crucial.

So how do you go about making sure that your employees AND your customers are getting the messages they need in a timely fashion?

One very simple, and incredibly efficient means of reaching both of these audiences is digital signage. The hardware, software, and technology behind digital signage has made giant leaps in the last few years, and those who are using it are finding it to be a crucial aspect of their communications strategies.

Just a few short years ago, the Veterans Affairs San Diego Healthcare System had no real means of displaying centralized messaging digitally. They had cork boards on walls in some locations, and in others people would post pieces of paper on walls in an effort to try and get attention for their new study, or for an upcoming event.

What they really needed, according to Cindy Butler, Public Affairs Director at the VA San Diego Healthcare System, was a means of controlling the messages that were being shared with staff and clients, and ensure that what was being communicated was professional, aesthetically pleasing, and met the VA’s criteria for messaging.

I spoke to both Cindy and Leila Rubio, who is an integral member of the public affairs department, a little while ago. I wanted to gain a better understanding of the strategies they’re establishing and tactics they’re employing to better communicate with both staff and clients.

Leila Rubio, who manages the digital signage, also manages the internet and intranet for the VA in San Diego. She manages all of the content, does the graphic design for the signage, and is responsible for the hardware that the signage runs on, as well. This makes her one of the busiest people we know.

With Cindy leading the public affairs strategies, and Leila at the reigns of the tactical implementation, the regional organization has found itself in very capable hands when it comes to communication.

Using digital signage, Leila is able to share messages with their employees that come directly from the Department of Veterans Affairs in Washington, D.C.

Initiatives to help employees stop smoking, frank conversations about suicide prevention, PTSD therapy, or issues relating particularly to veterans who are women are displayed to staff members in areas where they’re most likely to see them.

Another initiative that was started by Leila is to display the signage content on the front page of the employee intranet. When an employee sits down to log in to the intranet, they get to see the same messages that are displayed on the digital signage monitors.

Because some of the employees are not at campuses where the signage is, they would not get to see those messages otherwise. Just one more way in which they’re facilitating better communication with their staff.

It’s all geared towards improvement

The VASDHS is constantly improving. Currently recognized as a three-out-of-five stars facility, the San Diego VA hospital is not content to rest on those laurels and is actively attempting to make the hospital a better place for both patients and staff. They want one more star.

As a result, they’re using their signage capabilities to educate staff and clients about their initiatives to improve.

One of the ways that they do this is to interview their staff about the initiatives they’re undertaking to make the hospital a better place. Images of the staff members that they’ve interviewed along with a quote about what they’re doing to help with the improvements will be posted on the signage for all to see. 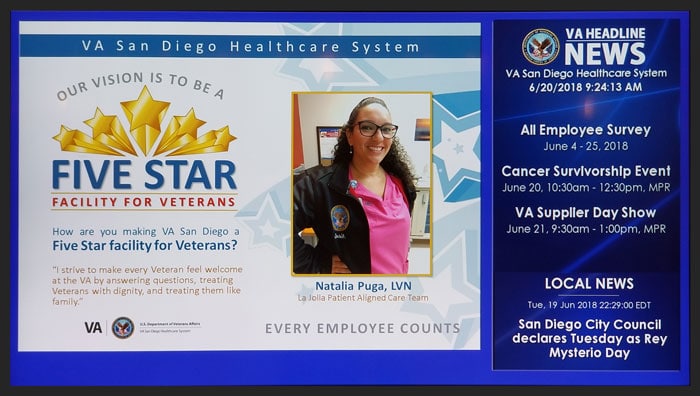 An example of how the VA is using digital signage.

They might also do something as simple as having messages about hand sanitation, a big, big deal at hospitals. These kinds of campaigns allow the VA to continuously improve their facilities, as well as the overall satisfaction with the organization as a whole.

And with strategically placed signage monitors in hallways and near elevators, they have a captive audience who will get the opportunity to read about what’s happening at the hospital in a way that actually captures their attention.

The scheduling of content is managed to ensure that each clinic gets content that is specific to their needs. They have content channels that they’re able to schedule for individual clinics, and within those clinics they have monitors in patient-specific areas. In those instances, the content would be geared to the patients at those locations, advising them about upcoming events and initiatives at those particular locations.

Through testing, they’ve been able to hone in on how to get the right messages to the right people at the right time, which is what signage is all about.

What the VA has learned about content display times

It takes time to understand more fully the ‘where and when’ of content for signage, and the team at the VA has been doing a lot of learning and optimizing of that process, so let’s look a little more closely at that part of it.

One of the things that anyone displaying content with digital signage has to consider is how long the content will be displayed. It’s the subtle art of making sure the people see the content without displaying it for so long and so often that they stop actually paying attention to any of the content.

What they have learned to do at the VA facilities is to display certain types of content in hallways and near elevators for only up to 15 seconds, while content in waiting rooms runs for twice as long at 30 seconds. 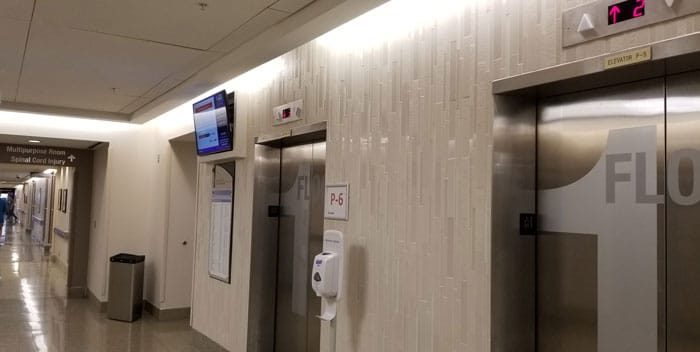 An example of signage placement at a VASDHS facility.

Another area where they’ve done a great job of learning to manage the display on their boards is in the emergency department.

Display content includes information about the processes for patients, and their specific wait times. The idea is to manage expectations for them and to keep them assured while waiting for urgent care.

According to a study called “Effects of Actual Waiting Time, Perceived Waiting Time, Information Delivery, and Expressive Quality on Patient Satisfaction in the Emergency Department,” it’s not the actual wait time that impacts the overall patient experience, but rather the perception of how they’ve spent their time. From the conclusion of the study:

The VA also employs a kind of ticker tape messaging system with news and weather where those wait times are displayed, which help to draw attention away from the fact that they’re waiting. The results is that patients have a much more satisfactory and professional experience.

An article in Digital Signage Today states that, “By strategically placing digital signage around hotspots where dwell times are longest, relevant messaging can be displayed to entertain and inform [patients],” resulting in a better experience while waiting.

This is just one of the tactics that they employ at their hospital and clinics, with the overall aim to continue getting better at serving their clients.

None of this happened overnight. It has been a process for the team, and they have learned a lot along the way.

“When we first started, we didn’t get much in the way of requests for content and we were scrambling to try to put stuff up, but now I think the proof of their success is that we get people asking for us to put content up all the time now,” Cindy told me when we spoke. And she’s constantly seeing real-world impact of their signage endeavors.

Cindy has had patients tell her that they found out about a research study because they were waiting by an elevator and they saw that message. Others have learned about new programs geared towards something specific to their particular needs.

And along with the success has come recognition.

The San Diego VA was the first hospital in their region to use digital information boards in a hospital, and they won an award as a result! Internally, the Department of Veterans Affairs has recognized the San Diego hospital as a facility that stands out amongst the rest. They’ve also received an award from the VA for their usage of digital signage.

When the medium is the message, signage is nothing without the people who work hard to make sure that the right messages are being conveyed. It’s up to amazing individuals like Cindy and Leila who are dedicated to improving their organization – people who help to uplift everyone around them.

Professionals like these make it look easy, but we know how hard they work to make sure everyone is being served in the best way possible. And we consider it an absolute privilege to be able to help them reach their goals.