You can find out more about how the SRT open-source protocol, Makito X4, and GV AMPP are fueling live cloud production in this webinar.

With significant changes in live broadcast workflows over the past two years, comes an increased need for cloud contribution and production enabling collaborators to work from anywhere. Thankfully, Grass Valley and Haivision have a combined solution enabling decentralized workflows for remote production. With Haivision’s Makito X4 being the first qualified video contribution encoder for the GV AMPP cloud-based live production system, broadcasters can now leverage the reliability, low latency, and security of SRT for live video contribution.

Learn how Haivision, SRT, and Grass Valley technology allows users to leverage the flexibility of the cloud for decentralized workflows in our webinar. 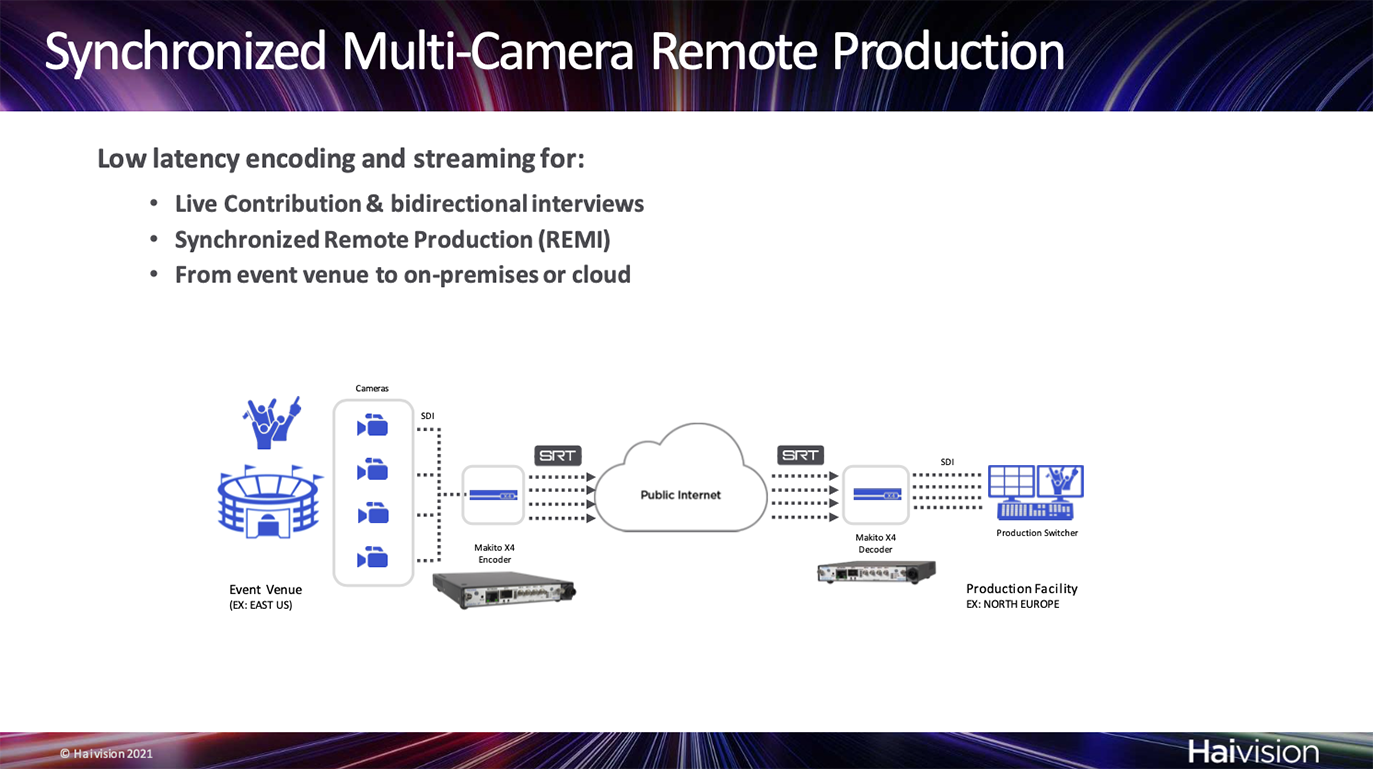 For synchronized multi-camera remote production, live video content from multiple event venue sources can be encoded in real-time with a Makito X4. The content is then streamed from the encoder, via SRT, over the internet or to Haivision Hub where it can then get transported into the GV AMPP cloud production workflow.

In order to send live contribution streams into GV AMPP, start by configuring your Makito X4 with settings needed for live production including choice of codec, encoding profile, resolution, bitrate, and more. For keeping multiple streams in sync, make sure that the timestamp function is properly set.

If you are using Haivision Hub to transport the streams then you should first create a route by configuring hublets within the regions that the video is being streamed to and from, in this case, a Makito X4 input, and an SRT output hublet for routing the streams to GV AMPP. Make sure that the proper settings are configured in Hub for the GV AMPP endpoint to properly receive the streams and start the route. If you’re sending multiple streams, repeat the process for each stream. Next, create URLs and passwords so that endpoint operators can access the protected content. You can then monitor the health of the streams in Hub through detailed statistics and thumbnails.

On the GV AMPP side, make sure that the settings are configured to properly receive the streams either directly from the Internet or by going through Hub. This will ensure that live broadcast producers can receive the streams with timestamps and have access to the content with the URL and passwords provided.

With a combination of the Haivision products, Grass Valley AMPP, and SRT, you can create a solution that will enable you to support a full live broadcast contribution and production workflow, even if all the stakeholders are in different locations