When we surveyed over 650 broadcasters and video streaming professionals on the state and future of the broadcast industry for this year’s Broadcast IP Transformation Report, we knew the global pandemic would have a lasting impact on the results for the foreseeable future.

The on-site limitations of producing live events during the pandemic have drastically changed the way that broadcasters work as they quickly adapted to facilitate staff working from home, leading to the rise of remote collaboration and decentralized workflows. This sped up the transition to IP for broadcasters and has resulted in an increased reliance on new technologies and methods for producing live video content.

As our Broadcast and IP Transformation Report 2022 shows, one of the technologies that broadcasters leveraged the most during this shift to remote production and collaboration workflows was SRT, the open source video transport protocol. But how much did SRT usage grow and what other factors contributed to its rise? Keep reading to find out.

For a deeper dive into the rise of SRT and more on how broadcast has changed over the last year, download the full report. 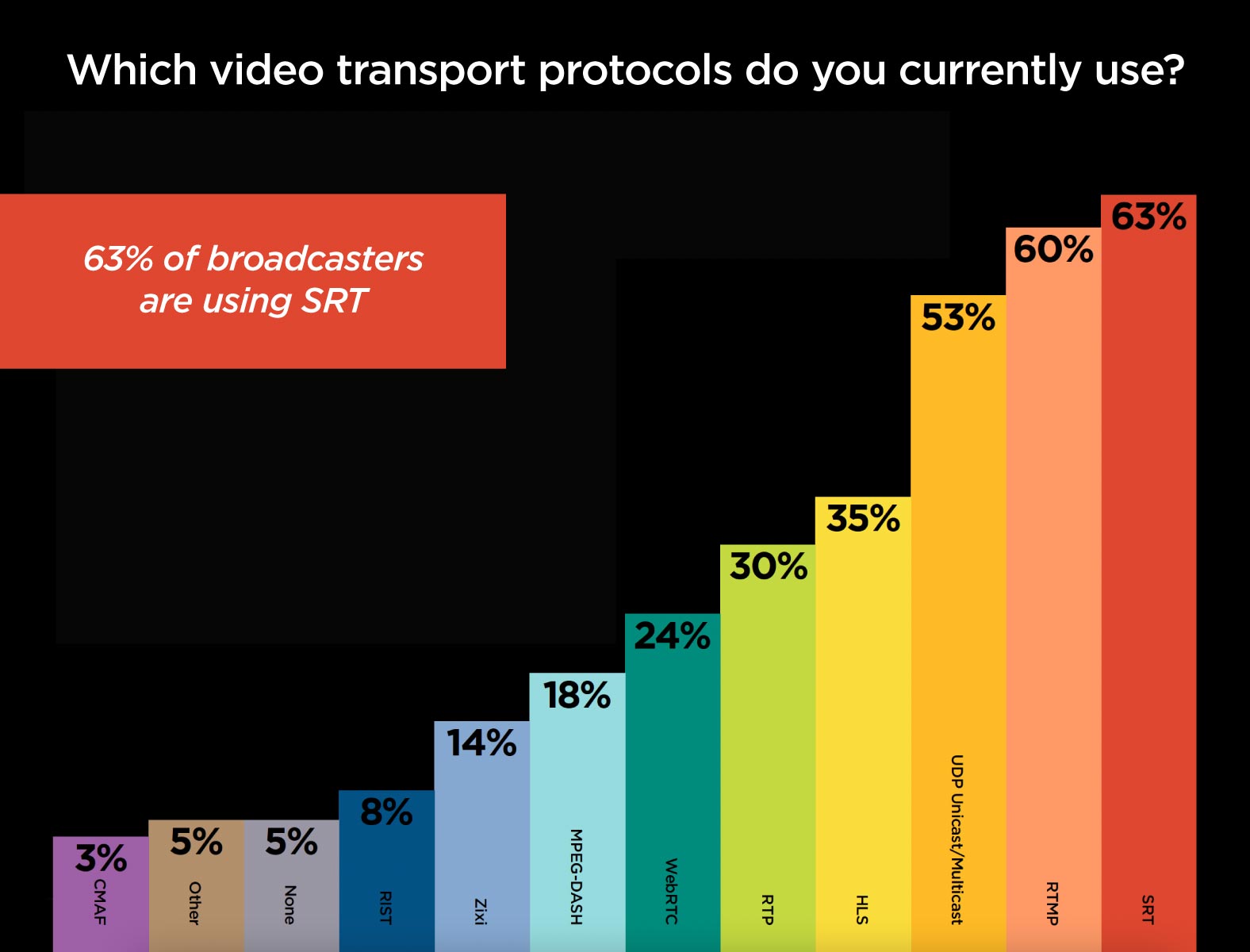 In this year’s report, 63% of broadcasters said they rely on SRT to transport their content, up from 53% last year, marking the first time that SRT has overtaken RTMP (60%) as the most used protocol since the start of the Broadcast Report. This jump in users shows that broadcasters believe that it can ensure secure and reliable transport streaming with low latency over unpredictable networks like the public internet. Live video contribution (62%) and remote production, or REMI (30%), were two of the main types of workflows deployed by those surveyed. Additionally, 28% of respondents said that unreliable networks are one of the biggest challenges they face, an issue that SRT was developed by Haivision to help solve.

Last year, most of those surveyed employed RTMP (Real-Time Messaging Protocol) to stream content to CDNs for delivery. However, the issues with RTMP are that it doesn’t support HEVC encoded streams, which 59% of respondents use for live video, especially for 4K content, and it’s no longer being supported or developed further. This has led more broadcasters to adopt SRT for its low latency, reliable security and because it’s codec agnostic, meaning it does not limit you to a specific container or codec. This increase in users has led SRT to overtake RTMP as the most popular method of transporting video over IP according to the survey.

Other video streaming protocols of note that were affected by the broadcast industry’s move to IP are HLS and MPEG-DASH. HLS was used by 35% of those surveyed and 18% of respondents said they use MPEG-DASH, as both remain the de-facto protocols when it comes to OTT delivery to consumer viewing devices. However, they are not as heavily relied on in production workflows as SRT, due to their higher latency, and are instead best suited for ABR streaming.

Broadcasters Trust SRT and the Internet to Deliver Their Content 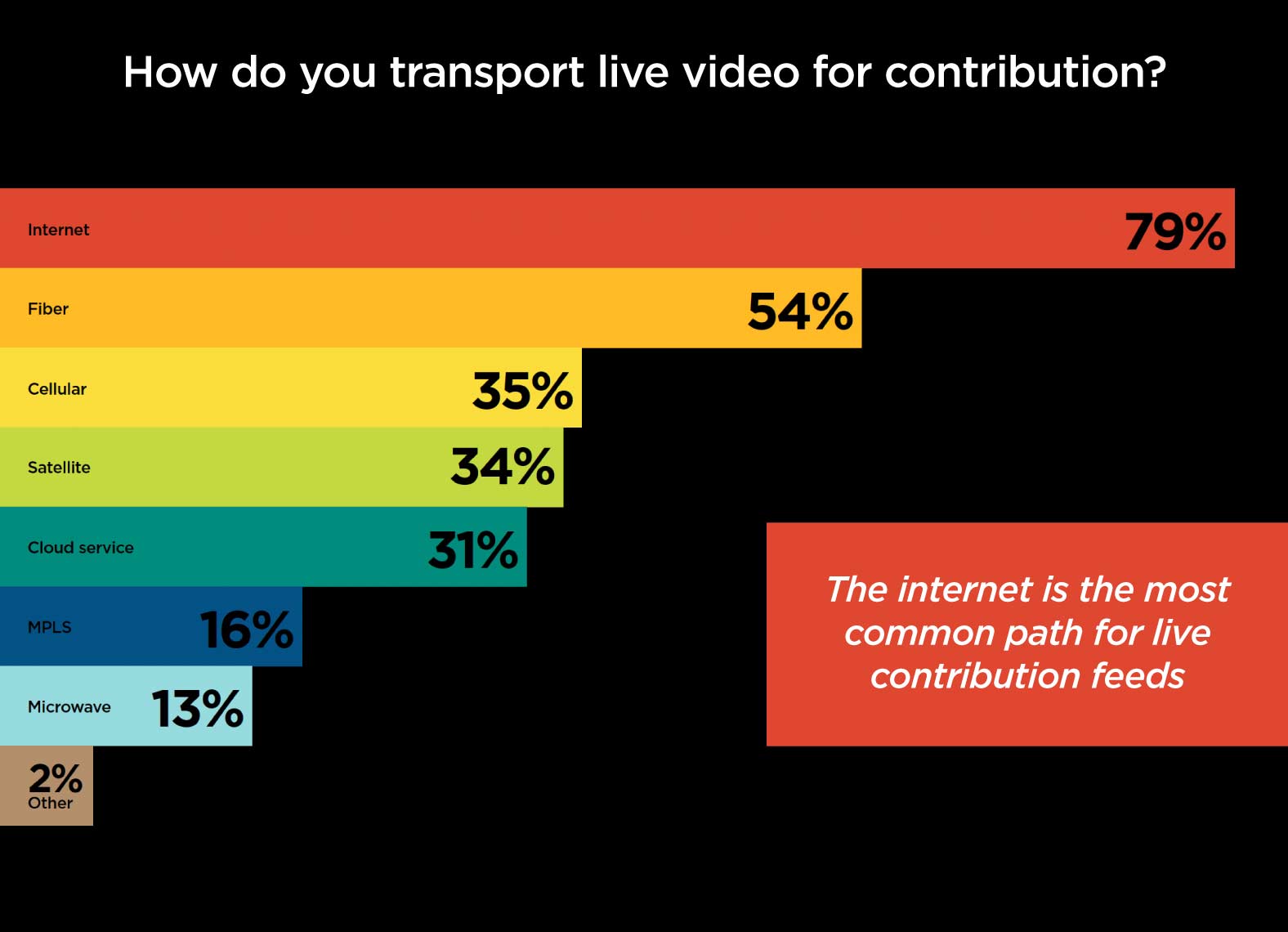 The internet is now the dominant way that broadcasters and video streaming professionals transport live video with 79% of respondents saying this is their preferred method. This goes hand-in-hand with SRT’s growth, as the industry continues to look for ways to reliably and securely transport live video from one production location to another over the public internet, at very low latency. Fiber remains the second choice and is used by 54% of respondents, but satellite dropped to fourth place behind cellular, which increased from 32% to 35%.

Along with cellular’s increase, 5G continues to be the biggest technology trend impacting the industry according to those surveyed (68%). Thanks to 5G, broadband internet is becoming more widespread and looks to change the industry by creating new and innovative possibilities for remote contribution and mobile collaboration.

With the need to move to IP workflows, more broadcasters are trusting the combination of SRT and the public internet to connect production sites over the internet. Even as the pandemic winds down, 60% of those surveyed believe that hybrid workflows are here to stay. This means that a secure and reliable way to share live video streams bi-directionally over the public internet will become increasingly important and these numbers show that more broadcasters are trusting SRT to transport their content.

Want to see how Haivision can help you?

Book a demo with one of our video experts to see how Haivision solutions can help you overcome today's broadcast challenges.