When Haivision set out to survey broadcasters in our first report on the state of IP and cloud adoption in 2019, we were curious to see what keeps those working in the industry up at night and asked respondents to rank their answers in order of importance. We wanted to dig deeper and really understand what were the biggest challenges and obstacles that our broadcast customers were grappling with. When we conducted the survey for a second time late last year, we asked the same questions to see what, if anything had changed about these challenges.

Learn the latest on the state of IP and cloud transformation in the broadcast industry. 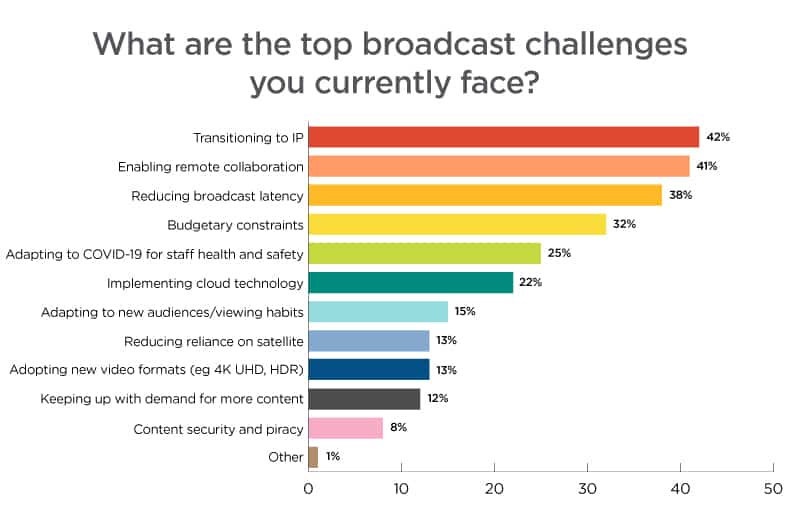 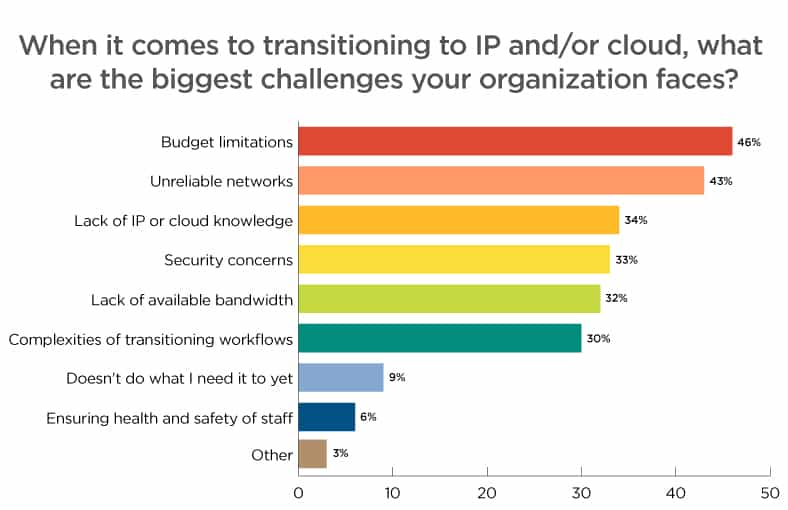 Unsurprisingly, budget limitations remain the biggest challenge for those transitioning to IP and cloud technology. This has been further compounded by the global pandemic, which has forced budgets to be redirected while increasing investments in IP and cloud solutions as evidenced by the 6% of respondents who cited health and safety as a challenge. The second biggest challenge is dealing with unreliable networks, whether for broadcast contribution or cloud ingest, a problem that the Secure Reliable Transport protocol (SRT) aims to address. In this year’s poll, lack of IP or cloud knowledge is the third most cited challenge. We expect that broadcasters will want to continue to improve their expertise in IP and cloud-based infrastructure in order to make the most informed decisions as they transition their production workflows.

This year we included some additional broadcast challenges presented by the pandemic, including remote production and ensuring the health and safety of staff. The second biggest challenge for broadcasters in 2020 however, turned out to be enabling remote collaboration; most likely the result of the sudden speed at which they needed to adapt and redesign workflows for newly distributed workforces.

The original REMI and at-home live production models were originally designed in order to send less personnel and equipment to the field and instead concentrate talent and production resources at a central location. Although the field contribution component is still relevant, production is no longer centralized as production staff, editors, directors, operators, and on-screen talent remain at home yet still need to be able to collaborate in real-time.

IP video streaming combined with software-defined and cloud-based video production tools has enabled broadcast professionals to continue to do their job no matter where they are. IP video streams can be used for all types of live production workflows including broadcast contribution, return feeds, bi-directional interviews, and broadcast monitoring. As a result, production facilities around the world are being decentralized.

Here’s what Mark Horchler, Haivision’s Marketing Director, Products and Solutions, has to say about remote collaboration in this recent SportsTech on Demand interview with SVG.

The third biggest challenge identified by broadcasters was the need to reduce broadcast latency. The drive towards low latency is constant and the ability for broadcasters to reduce glass-to-glass latency is clearly still a key concern. There are many factors that contribute to latency from the network speed and type, the individual components in the broadcast workflow as well as the choice of protocols and output formats. And of course, with more broadcasters relying on video streaming to support remote collaboration, latency between video production elements also need to be kept as low as possible.

There are several ways to minimize video latency without having to compromise on picture quality. The first is to choose a hardware encoder and decoder pair engineered to keep latency as low as possible, even when using a standard internet connection. The latest generation of video encoders and video decoders can maintain low latency (under 50ms in some cases) and have enough processing power to encode video in HEVC at extremely low bitrates (down to under 3 Mbps) all while maintaining high picture quality.

Another key factor in achieving lower levels of latency is to select a video transport protocol that will deliver high-quality video at low latency over noisy, public networks like the internet. Successfully streaming video over the internet without compromising on picture quality, requires some form of error correction to prevent packet loss. Packet loss recovery approaches will introduce latency, but some more than others. The Secure Reliable Transport (SRT) open source protocol leverages ARQ error correction to help prevent packet loss while introducing less latency than other approaches including FEC and RTMP.

Though the trend is recent, with the right technology in place, decentralized production of live sports events has already been proven to work. Last year, the NFL relied on SRT and Haivision streaming technology to pull off a virtual draft, watched by 55 million viewers, with players and talent contributing from home.

Fox Sports also succeeded in bringing NASCAR and MLB back to TV while keeping many of their production team at home. Haivision Makito video encoders, decoders, and an SRT Gateway were used for real-time collaboration between multiple production facilities, home-based producers, and executives.

We're here to help. Contact one of our video solution experts today to get the answers to your questions about Haivision solutions for braodcast.