Did you catch the latest SRT Tuesday webinar sponsored by Microsoft and the SRT Alliance? In case you missed it, you can now watch the recording on-demand to learn more about how to leverage the SRT streaming protocol along with Haivision’s state of the art video solutions to create low latency 4K workflows for remote production, contribution, and monitoring over IP networks.

Curious to find out how Haivision products can deliver low latency, live 4K video for broadcast contribution, monitoring, and distribution using SRT? Using a Makito X4 Encoder, an SRT Gateway for stream routing, and the newest member of the Haivision family, the Makito X4 Decoder, this webinar demonstrates how quick and easy it is to create a live 4K video stream with step by step instructions.

Haivision’s Vice President of Product Marketing, Marcus Schioler, walks us through the setup of each component in the 4K broadcast contribution workflow. First, the Makito X4 video encoder is used to encode a camera’s SDI video to HEVC. Then the video encoder delivers the UHD video as an SRT stream to an SRT Gateway virtual machine deployed within the Microsoft Azure cloud for stream routing and replication. By using SRT Gateway, streams can be easily shared across local network firewalls.

The All New Makito X4 Decoder: What You Need to Know

Ghislain provides an in-depth overview of the key features of the newly released Makito X4 Decoder, highlighting what makes this video decoder a vital component of 4K over IP workflows. A perfect companion to the award-winning Makito X4 Encoder, the video decoder is built on the same video processing platform and can: 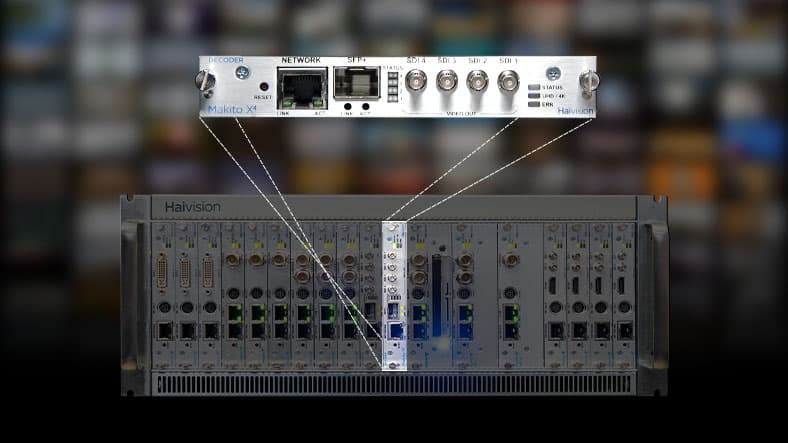 Ghislain explains that where the Makito X4 platform really shines is with its unrivaled density and flexible form factor. Its super low power (maximum 18watts), portable small form factor makes the decoder extremely versatile and perfect for deployment in the field. Available as an appliance or a blade, the decoder can be used within Haivision’s MB6 or MB21X chassis to deliver the highest density decoding solution in the industry with up to 21 channels of 4K or 84 channels of HD at 1080p.

In addition to setting up the contribution stream, the webinar also demonstrates how easy it is to monitor SRT feeds remotely thanks to the free Haivision mobile app, Play Pro. Play Pro offers users a convenient way to monitor any feed or channel from anywhere using the SRT protocol. You can create universal links for easy sharing of SRT steams with production partners and work colleagues. Marcus and Ghislain also give a quick demonstration on how to share universal links using QR codes. Using Play Pro, broadcast producers, directors, executives, and on-air talent can monitor contribution streams and view return feeds from the field. These can include live-to-air streams, remote interview streams, or even teleprompter feeds from the editorial desk.

Finally, Ghislain and Marcus also discuss how Haivision EMS, an element management system, can be used to centrally manage many Haivision devices across multiple locations. EMS allows users to easily view all Makito X, Makito X1, and Makito X4 video encoders and decoders, group, and tag devices by function or location, for example, monitor device status in real-time, and carry out centralized upgrades from a single screen. By centrally managing devices using EMS, organizations can boost operational efficiency, quickly identify and resolve any performance issues, and improve quality of service.