We’re thrilled to announce that our definitive free SRT player app, Haivision Play Pro, is now available for Android. After its initial release for iOS, Play Pro has quickly become a critical component in a whole host of workflows and is relied upon by broadcasters large and small around the globe, with thousands of downloads to date. Recently recognized as the winner of the 2020 NAB Show Product of the Year Award in the remote production category, Haivision Play Pro enables broadcast engineers, producers, directors, executives, and on-air talent working in the field or remotely from home to easily and securely monitor contribution streams, return, and teleprompter feeds as well as create video as an SRT stream directly from a mobile device.

Haivision Play Pro allows users (typically broadcasters and developers) to securely play or stream live SRT feeds from anywhere over the internet. With Play Pro, users can reliably play low-latency SRT streams up to 4K/UHD, with the security of AES encryption on a mobile device, and easily monitor multiple feeds that can be compiled and shared in customized lists for on-the-go access to entire SRT channel lineups.

A Versatile Tool in the Toolbox

In a recent poll of our Play Pro users, we asked respondents to tell us what they were using Play Pro for and their answers demonstrated the versatility of the app, with a range of different use cases being mentioned. The top three use cases were: remote monitoring (68%), return feeds (43%), and remote contribution (34%).

In what has been a very difficult year for broadcasters grappling with the challenges of remote working and distributed workforces, Play Pro is proving to be instrumental for remote collaboration. Haivision’s free Play Pro application gives broadcasters a simple, secure, and reliable way of providing teams with access to low latency, live video content that could previously only be viewed from a master control room or production studio.

“Haivision Play Pro has been a momentous accelerator to the adoption of SRT and IP workflows worldwide,” said Peter Maag, CMO and EVP Strategic Partnerships, Haivision. “For broadcasters and developers who need to securely play or stream live IP video feeds, we’re bringing the reliability, security, and ultra-low latency of SRT streaming to mobile devices for anyone to use, anywhere with an internet connection.” 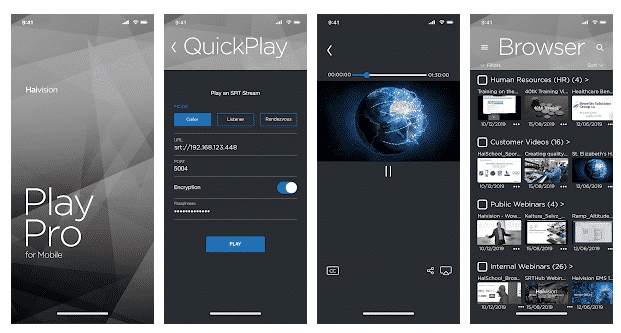 Quickplay – Easily and securely play SRT streams from a mobile device. Users can watch live SRT streams in real-time from anywhere using an internet connection over Wi-Fi or mobile networks.

Mobile Streaming – Stream live using the mobile device’s camera as a source. A cost-effective alternative to deploying equipment and resources at remote event locations, users can quickly and easily feed video as an SRT stream directly from their phone.

Shareable Channel Lineups – Streams can be aggregated into customized lists called channel lineups, allowing users to monitor of multiple feeds all in one place, for convenient on-the-go access from their mobile device. Lineups can be easily shared, and password protection ensures that they can only be viewed by authorized parties.

Lineup Publishing – Channel lineups can be published to an online location, helping organizations with multiple viewers ensure that all users can easily access feeds. Lineups can be published to a cloud server URL for sharing, as an alternative to sending lineups to each user individually. Once users have subscribed to the channel, any changes to channel lineups on the cloud server will update automatically on subscribed devices.

QR Code Scanning – Play Pro streaming settings generated as QR codes with Playmaker can be scanned using the mobile device’s camera, eliminating errors by non-technical staff and allowing them to play or stream from Play Pro without the hassle of configuring settings themselves.Play Pro Playmaker – A companion web tool for Play Pro, administrators can use Playmaker to configure Play Pro settings with ease from a web page rather than their mobile device. Quickplay or streaming settings configured through Playmaker can be shared as a Universal Link URL or QR code so that users do not have to configure Play Pro themselves.

GET IT ON GOOGLE PLAY