Haivision Hub is More Agile Than Ever

Haivision Hub is the fastest and easiest way to build live broadcast workflows across different locations. By pointing and clicking from a single browser window, users can instantly route live video from a remote location to an on-premise or cloud-based production facility.

As a video network service, Haivision Hub enables broadcasters to create live production, remote collaboration, and content distribution workflows by connecting Hublets, the building blocks within Haivision Hub, across different cloud regions. The expanding Hublet library allows broadcasters to define ingress points into the Hub network, such as an SRT stream or a Makito encoder, a Process Hublet such as the Real-time Transcoder for optimizing live video feeds, or an Output Hublet as the egress out to SRT, RTMP, RTP, Haivision Play Pro, Akamai, Facebook, and YouTube destination.

Add More Outputs with No Downtime

With our latest update to Haivision Hub, we’ve introduced the ability to add and remove Output Hublets to an already running route thus making it easier to expand a linear distribution network or enable remote collaboration workflows that evolve over time.

For example, you may have a Makito Input Hublet set up in Los Angeles sending a live video stream to New York via an SRT Output Hublet that’s been up and running for a few hours. If a producer in London or an affiliate in Amsterdam later needs access to the same video, Hub operators can add additional Output Hublets, each with their own destination and streaming protocol configurations, to the existing route without stopping or interruption.

Download the datasheet to learn more about how Haivision Hub can help you.

The ability to add extra outputs to a running route not only prevents downtime, but also provides broadcasters more granular control and makes it easier than ever to optimize resources and manage costs. Rather than having all Output Hublets running all the time, even if they aren’t all being used at once, Hub operators can now simply allocate outputs as needed. Stopping an output reduces egress costs, although charges may still apply as the Hublet remains idle within a cloud region. By deleting an Output Hublet that is no longer needed, costs can be reduced even further without impacting the primary route. 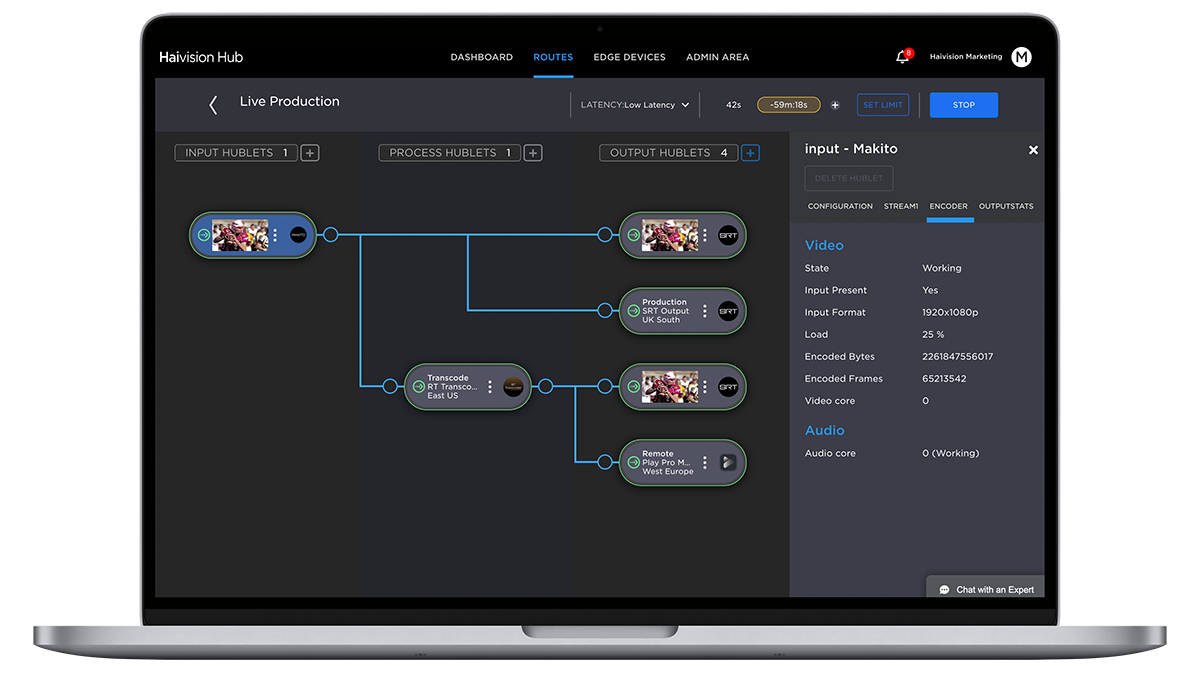 Also new in Haivision Hub is the ability to easily preview video for each Input and Output Hublet. Video thumbnails give broadcasters confidence monitoring and troubleshooting insights necessary for critical events. Is an output Hublet not displaying a video stream the correct way? You can start by clicking on the input Hublet to clearly see if it is processing the right video. Even if you are sitting thousands of miles away, users can now easily see if a camera has been turned on and connected to a Makito encoder. When managing a complex workflow with multiple Input and Output Hublets, you can now use the new preview function to see all the streams at one glance for global confidence monitoring of your entire workflow. With Haivision Hub you can always see what’s coming into and out of your video network.

Speak with one of our experts and see a demo of Haivision Hub's features.